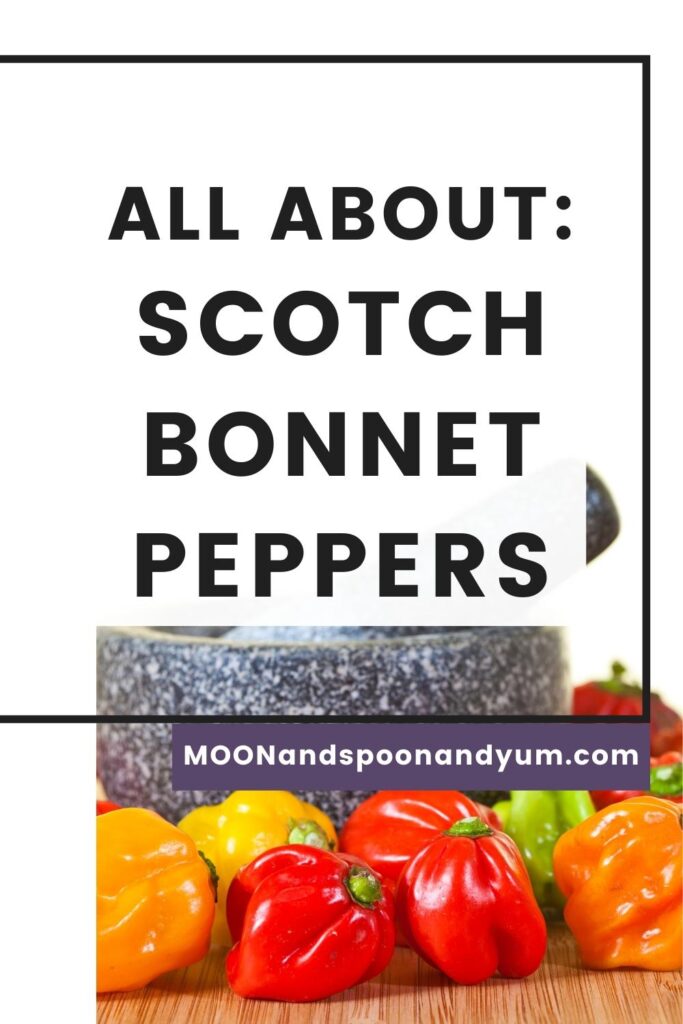 Let's dive into the world of the scotch bonnet pepper! What they are, how they taste, how to use them, recipes, and more!

What Are Scotch Bonnet Peppers?

Scotch bonnet peppers are a type of chili pepper that is commonly used in Caribbean cuisine. The peppers get their name from their resemblance to a tam o' shanter hat, which is a type of traditional Scottish hat. Scotch bonnet peppers are also known as Caribbean red peppers, Bahama Mama, bonney peppers, the Martinique pepper or Jamaican hot peppers.

The peppers are typically small, only 2-3 inches in diameter. They are very spicy, with a Scoville rating of 100,000-350,000. This makes them one of the hottest chili peppers available (though not quite as hot as a ghost pepper!). The heat level of the pepper can vary depending on where it is grown and the conditions in which it was grown.

Scotch bonnet peppers have a unique flavor in the pepper world, as they are fruity, and tropical, with a subtle sweetness and a hint of smokiness. The level of heat can vary from pepper to pepper, but they are always quite spicy and considered one of the hottest peppers.

Is Scotch Bonnet Hotter Than Habanero?

No, scotch bonnet peppers are actually on a level playing field with habanero peppers. They both average 100,000-350,000 Scoville heat units on the Scoville scale, which is a good dose of spiciness!

How to Use Scotch Bonnet Peppers

Scotch bonnet chili peppers are most commonly used in Caribbean cooking in dishes such as curries, soups and stews. They can also be used to make hot sauces and marinades.

Some traditional and popular recipes that feature scotch bonnet chile peppers include:

In addition to their culinary versatility, scotch bonnet peppers also offer a number of health benefits.

For one, they’re an excellent source of vitamins A and C. Vitamin A is important for maintaining healthy vision, while vitamin C helps to keep the immune system strong.

Scotch bonnet peppers are also a good source of antioxidants and capsaicin. Capsaicin is the compound that gives peppers their heat, and it’s been shown to have anti-inflammatory, pain-relieving, and even cancer-fighting properties.

So if you’re looking for a way to add some spice to your life, scotch bonnet peppers may be a good option. Just be sure to handle them with care, as their heat can be quite intense.

Where to Buy Scotch Bonnets

If you’re lucky enough to live in an area with a Caribbean population, you may be able to find scotch bonnet peppers at your local grocery store. Otherwise, you can order them online from a number of different retailers.

When shopping for scotch bonnets, look for peppers that are bright red or orange and have smooth, wrinkle-free skin. Avoid peppers that are dull in color or have blemishes, as these may be past their prime.

Once you’ve got your hands on some scotch bonnets, be sure to store them in a cool, dark place. If you need to keep them for a longer period of time, you can freeze them whole or in slices. Just be sure to use airtight bags or containers to prevent freezer burn.

Now that you know where to buy scotch bonnets, it’s time to get cooking! These fiery peppers can add a touch of spice to just about any dish.

If you're looking for a spicy kick in your cooking, scotch bonnet peppers are a great option! These fiery little peppers pack quite a punch, so be sure to remove the seeds and ribs before using them in your recipes (unless of course, you want maximum heat!). When used judiciously, scotch bonnet peppers can add just the right amount of heat to any dish!