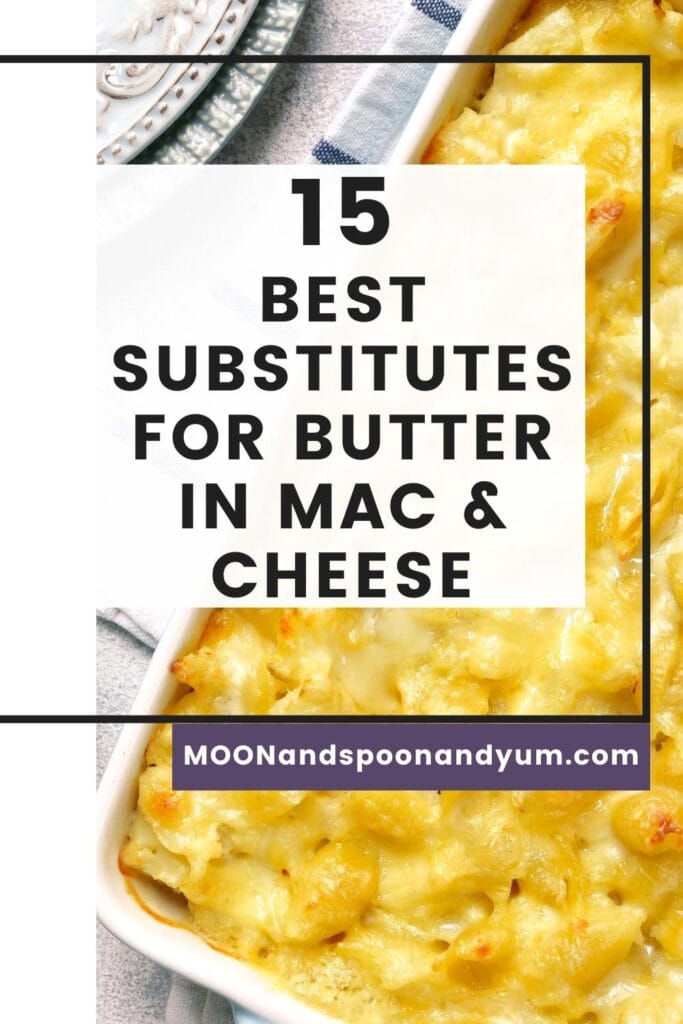 Ahh, macaroni and cheese: a rich, creamy pasta dish that's a staple in the kitchen, easy to make and delicious. There are a lot of things to love about this—and a lot of ways to change it up. The ultimate comfort food, it only takes a few simple ingredients: milk, cheese, butter, and noodles. Once you've got the recipe down, it's easy to tweak. Out of ingredients? Looking for alternatives? We've got you covered.

Butter lends an extra creaminess that enriches this pasta dish that's always good to add, but not strictly necessary. Here are the 15 best butter substitutes for your mac and cheese!

What Can You Substitute for Butter in Macaroni and Cheese?

Margarine is the closest to butter in terms of taste and texture (and calories!), so if you're looking for a vegan or dairy-free alternative without sacrificing that buttery flavor, it’s your best bet. Made from vegetable oils, it lessens 'bad' cholesterol in the recipe, which in turn lessens fat consumption. Just make sure to check the labels, as not all margarine is created equal. Read: some do contain trans fat, so it's best to be mindful.

Cream cheese in place of butter makes for a gooey, cheesy mac and cheese dish. Because of the flavor profile of this substitute, you can also cut out the milk—without sacrificing the creaminess you're used to. Keep in mind that this has a slightly thicker texture, so you might want to add oil or margarine to avoid macaroni that sticks and also avoid adding too much cream cheese.

Speaking of oil, certain oils—coconut oil, in particular—is a great butter substitute in terms of texture. It needs extra effort to get right, though: too much of it can ruin the cheese sauce. The trick is looking at other ingredients you can add, like cream (or coconut cream), that make up the flavor factor. An alternative to this would be using plant-based butter instead.

Olive oil is a little tricky. Some like it, others don't. On principle, you can use olive oil as a substitute, but do it to taste. Use extra virgin olive oil so the flavor isn't so strong as to overpower the cheese sauce. An alternative to this would be canola oil.

This butter replacement, in particular, is more along the lines of using plant-based oils. The rise of avocado in meals is undeniable, and it makes sense. There's a creaminess to avocado that elevates whatever dish it's added to, so if in a pinch (or looking to experiment), substitute this for butter. As always, do it to taste.

Heavy cream is the stuff that makes butter, so it makes sense to use it as a substitute. Heavy cream makes it, well, heavy—richer, creamier, and, since it's relatively tamer in flavor, good for when you want to experiment with adding flavoring. Use this for a more decadent take on a classic. Use the same amount of tablespoons you would normally use in butter.

Much like heavy cream, adding sour cream in makes for a richer mac and cheese. This is a flavored substitute that adds tanginess, so if you're not used to adding sour cream to your recipe, add a little at a time. If you're a fan, you can add more as you go along.

Yogurt is a popular substitute (even add-on!) to mac and cheese recipes. It's a lot like sour cream in some regards, especially in adding that hint of sourness. It does have a slightly thicker texture, so be careful to combine all the ingredients to achieve the best consistency. If so desired, you can cut out the milk here, too. Just be certain to use plain yogurt!

"Whoa, peanut butter? Really?" Yes, really. Peanut butter can be used as a butter substitute for mac and cheese, adding a nutty flavor on top of the creaminess. Nut butters, in particular, are great vegan alternatives. It does alter the taste a bit, but it's great for shaking things up. Almond butter is quite a popular substitute as well.

A fan of the nutty component but a little skeptical about using peanut butter? Go for ghee. Ghee is clarified butter, which means it's been simmered and strained of its water content, as well as lactose—making it better for those with dairy restrictions. Like butter, it has a relatively higher fat content than some of the alternatives here, but it's also got less oil.

Cottage cheese is another alternative to try. Like some of the options here, cottage cheese has a thicker texture, which can make for a slightly richer cheese sauce. But fret not! Cottage cheese doesn't have an overwhelming flavor profile, which makes it a great alternative.

Here's another cheese substitute for butter: much like cottage cheese, ricotta cheese tends to add a rich, creamy texture that doesn't overwhelm the taste buds. Use less of it than you would butter if you want a slightly thinner sauce, but in general, you can use a 1:1 ratio. It also adds a slightly sweet hint that enriches the flavor profile of an already beloved dish.

Here's where it gets a little controversial. Some people add mayonnaise to their macaroni and cheese, sure, but as a butter alternative? People are of two minds. It's not a strict butter replacement, but it does act as a sauce thickener with the added bonus of lending a slight sweetness to the dish. This is one of my personal fave butter alternatives!

Looking for another vegan substitute? Give tahini a try. Tahini is made from toasted ground hulled sesame seeds and is a staple in Middle Eastern cuisine. It has a slightly nutty flavor that, like some of the options here, and certainly elevates your standard pasta.

A fan of sweetness in your mac and cheese? Try this one. Thick and creamy, it's a great alternative for those looking to add vegetables to an otherwise decadent dish. Do take note that pumpkin has a prominent flavor that alters the taste by quite a bit, so substitute with caution.

So there you have it! Whether you're out of ingredients, looking for vegan alternatives, or just plain looking to experiment on regular mac and cheese, there's something for you here. If you enjoyed this post, I would so appreciate you dropping me a line in the comments below or sharing this post on social media. Thank you!

Best Substitutes for Milk in Mac and Cheese

Best Sides for Mac and Cheese