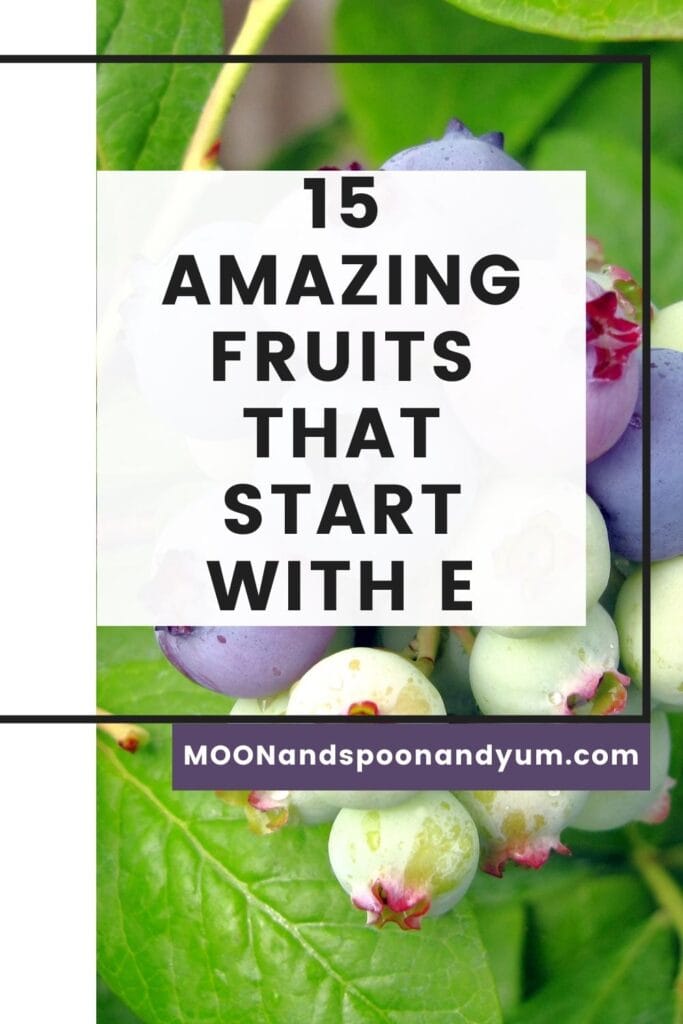 Eating more fruits is good for your health. Which fruits should you be eating? See the top 17 fruits that start with the letter E here.

From the top of your mind, how many fruits can you enumerate that start with E? Of course, it’s okay if you can only think of one or two. While you might be familiar with some of these fruits, there are also a few that you’ll be happy to discover! Let’s learn about fruits that start with E while eating healthier too!

List of Fruits That Start with the Letter E

Early Gold Mango (or Earlygold) is an early-season mango that originates from Florida. Early Gold mangoes are medium-sized mangoes that have a dark yellow flesh. These mangoes are known to have a sweet and aromatic taste. They are rich in vitamin a and vitamin c.

Native to southern Mexico, egg fruits (also knowns as canistel fruit) have a dark yellow flesh that has a similar texture to egg yolk. Egg fruits are known to be dry, with a taste that is similar to cooked sweet potatoes only more delicate.

Eglantine, also called sweetbriar, is a species of rose that originates from Europe. Eglantine fruits are strongly apple-scented. Like most rose species, eglantines have a hip that is popularly used for tea.

Egusi fruit is a wild gourd that originates from West Africa. It might look similar to watermelons, but the flesh of egusi is dry, bitter, and often not eaten. Rather than the fruit, egusi is primarily grown for its large seeds. Egusi seeds are similar to pumpkin seeds but are creamier. They can be eaten raw or can be used in cooking.

Elderberry fruit is a dark purple berry from Europe. Fresh elderberries range from having a sweet flavor to being tart, tangy, or bitter. They are little berries that are nutritious and packed with vitamins, antioxidants and numerous health benefits (especially for the immune system). When mature, elderberries are juicy and edible. They are safe to eat raw or turned into juice.

Elephant apples, or wood apples, are yellow-green fruits that are native to Southeast Asia including India, Vietnam, Thailand, and Malaysia, and are a favorite healthy snack of wild elephants. Its pulp has a bitter-sour taste that is often used in making curries, jams, jellies, and chutneys.

Emblica fruit, or Indian Gooseberry or amla, is a small and round yellow-green fruit that is native to tropical and subtropical Asia. Despite its extremely sour taste, it is considered a superfruit as it contains 2-3 times more vitamin C than oranges. Emblica can be used in pickles, salads, jams, jellies, or juice.

Emu apple is a golf ball-sized fruit that is native to Australia. Packed with antioxidants, this purplish red fruit can be eaten raw or cooked. Its flavor is similar to a sour plum and is used to make jams. Some people also recommend to bury the fruit for several days before eating it as this process enhances the fruit's taste.

Emu berries, also known as dysentery bush, which grows in tropical climates, is a tiny berry-like fruit that has a sweet taste. This is commonly used for medicinal purposes but it can also be eaten raw. Adding emu berries into your daily diet will give you a lot of nutrients as it is a good source of vitamin C, iron, calcium, sodium, and dietary fiber.

Entawak is a round yellow or brown fruit that has a spiky shell. Although its appearance is similar to jackfruit, its inside has a flavor that is sweet and intense, and tastes like squash or pumpkin. The flesh of Entawak is usually eaten raw but it has seeds that can be roasted and eaten.

Enterprise apples are big in size with a bright red color fading to orange. Modernly bred, an Enterprise apple tastes similar to Fuji apples and are great to pair with Fall flavors such as cinnamon and other spicy, warm flavors.

Ephedra, or Ma Huang, has a red and juicy fruit but the ephedra plant is more commonly used as a medicinal herb. Although it is considered a magic pill that boosts energy and promotes weight loss, some authorities have warned or even banned the consumption of ephedra because of its possible serious side effects.

Etrog fruit, or yellow citron, is one of the oldest varieties of citrus that dates back to 8,000 B.C. The fruit looks like a large, oblong lemon but has a thick and bumpy rind. It has a very acidic taste and unlike lemon, it contains mostly pith and little to no flesh. It holds special significance in Jewish traditions for the holiday known as Sukkot.

European pears (also known as the common pear) have a buttery-juicy texture. It can be eaten raw with its skin, added to pies, tarts, or yogurts. Unlike Asian pears, they are usually harvested unripe because matured fruits deteriorate faster and provide a dry, mealy texture and unpleasant taste. They are a good source of potassium.

Evergreen Huckleberry fruit, also called California Huckleberry, is a small purplish-black berry. Like other berries, evergreen huckleberries can be eaten fresh or dried and added to different baked goods such as cakes and muffins.

30 Foods That Start With Y