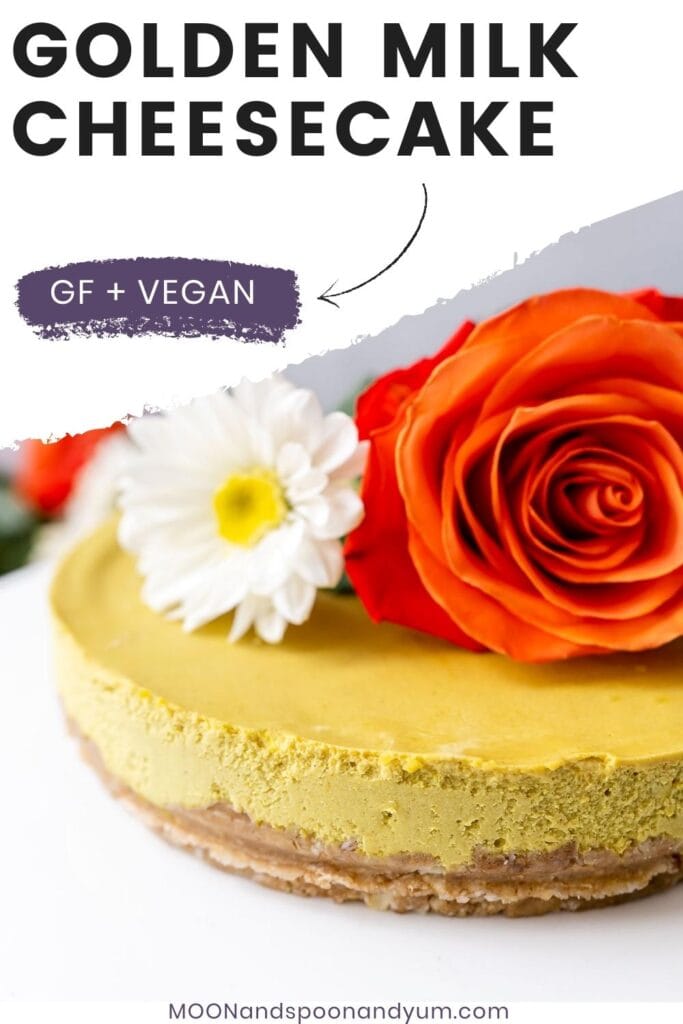 This post is sponsored by Earth Echo. All opinions expressed are my own.

Why You'll Love This Recipe

Earth Echo Golden Superfood Bliss is an amazing superfood powder that is packed with powerful ingredients like turmeric root, amla fruit, ashwagandha, MCT oil powder and medicinal mushrooms. It is a powerhouse of nutrition, all wrapped up in one vibrant and tasty blend. This superfood powder can be mixed into hot or cold drinks, baked goods, savory dishes or no-bake treats like this vegan cheesecake! Bonus: Earth Echo is a fabulous eco-friendly company rooted in sustainable practices. Get 15% of Golden Superfood Bliss today with code: YUM.

Cashews: Raw cashews are not only more nutritious than roasted cashews, they also result in a creamier cheesecake. Having said that, if you only have regular, unsalted cashews, they will work in a pinch. If you cannot eat cashews, hazelnuts or macadamia nuts work well, too. Caraway Cookware Buy Now Our Review
We earn a commission if you make a purchase, at no additional cost to you.

Shredded coconut: This adds texture and flavor to the crust, as well as helps it hold together. If you do not have shredded coconut, you can use coconut flakes, coconut chips or dried fruit in its place.

Maple syrup: This natural vegan sweetener greatly complements the golden milk flavors in this cheesecake. However, feel free to use any liquid sweetener you prefer. Honey, agave nectar or a liquid sugar-free sweetener work well, too.

Coconut oil: This helps the cheesecake and crust set, as well as contributes to the overall texture.

Cinnamon: A touch of cinnamon adds warmth to the crust as well as ties it in with the flavors in the cheesecake filling.

Vanilla extract: Vanilla greatly complements the other flavors in this cheesecake recipe. If you do not have vanilla, you can omit or replace it with almond extract instead.

Lemon juice: Lemon juice adds a touch of tanginess to the filling that is reminiscent of the cream cheese used in conventional cheesecake recipes.

Oat milk: Oat milk is a wonderful rich and creamy vegan milk that adds additional creaminess to this cheesecake. Having said that, any milk can be used in a pinch! 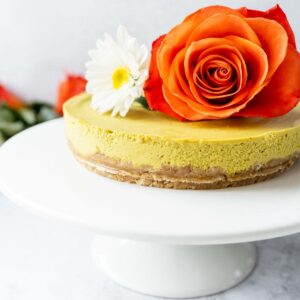 Get 15% off Earth Echo Golden Superfood Bliss with code: YUM. Do not have a springform cake pan with a removable bottom? Use a loaf pan instead! To decorate, top the cake with edible flowers or fresh fruit for special touch. You might also like: Vegan Golden Milk Gummies. You might also like: Golden Pumpkin Muffins.

Earth Echo Golden Superfood Bliss
Have you tried this recipe?Please Rate + Comment Below!
Mention on Instagram!@moon.and.spoon.and.yum