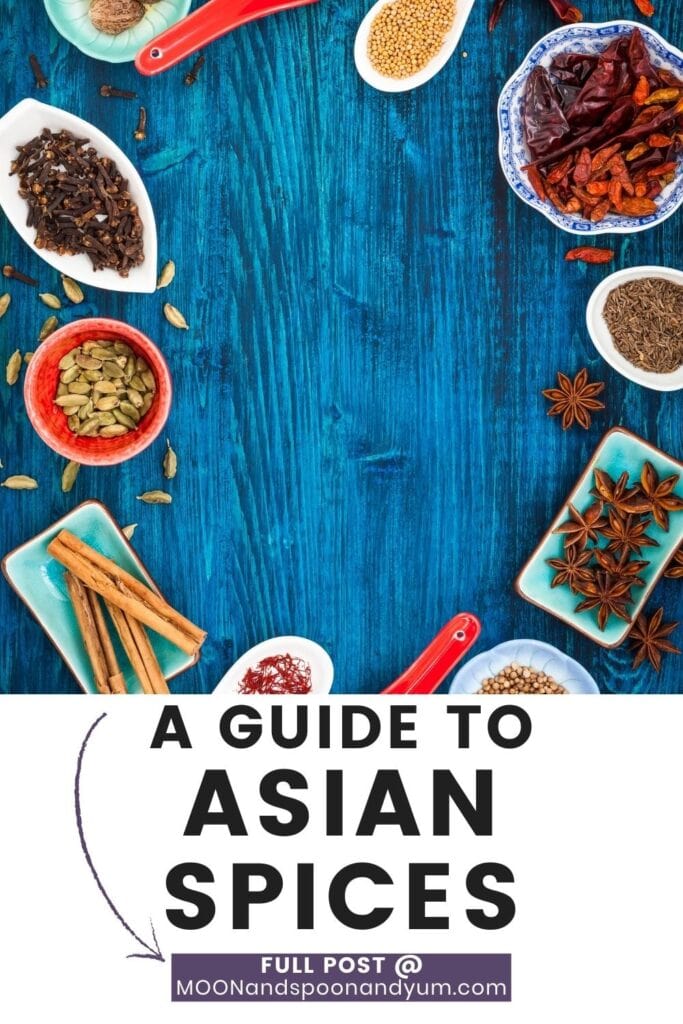 Let's learn about Asian spices, the various types and how to incorporate Asian spices into various dishes and recipes.

Asian spices are a large and diverse group of spices originating in Asia. They can be used in any type of food to add flavor. There are many different types of Asian spices, but they all fall into one of three categories:

What are the Different Types of Spices Found in Asian Cooking?

Turmeric is a spice with a rich, pungent flavor. It's a popular component in Indian cuisine, and it's used to make curry. Turmeric has been used in Asia as well as in the West for thousands of years. It is rich in anti-inflammatory properties.

Ginger is a spice that is native to Asia, but has grown prolifically in Europe and the Americas. Used primarily in cooking, ginger can be used as a spice for meats and vegetables to add flavor or used as an ingredient in marinades. Ginger has also been known to reduce pain from inflammation and serve as a natural remedy for migraines.

Cardamom is a spice commonly used in many desserts and drinks. It is also used as a digestive aid, as a tea addition, and is sometimes used to flavor coffee. It is highly fragrant, with a slightly sweet flavor profile. You can buy it whole in cardamom pods or in powder form. It is a staple in Indian cooking.

Black pepper is a spice, derived from the fruit of a vine native to south India, and commonly cultivated in tropical countries. Black peppercorns, which typically contain a small amount of piperine as well as a significant amount of pyrazine (both aromatic organic compounds), are used by many cultures worldwide in both ground and whole forms.

Coriander is a spicy, citrusy herb that can be grown in most parts of the world. It can be used to flavor many different dishes. Coriander is often used in Mexican and Indian cooking as well as in certain types of curry dishes from a few different cuisines.

In Asian cooking, white peppercorns are often ground as a final step to add flavor to a dish, or they can be used whole. Because they have a stronger flavor than black pepper, they are more frequently ground and used sparingly in a dish.

Cloves are the dried flower buds of a tree in the family Myrtaceae (Myrtle). Cloves are aromatic and warming when eaten, used as a natural remedy or used in cooking. It is important to use whole cloves when cooking as opposed to ground cloves because they will have a stronger flavor. Pre-ground cloves lose their potency quickly - so if you want to store them for later use, make sure to keep them stored in an airtight container in a cool, dark place.

Chinese chives are a variety of onion that has a mild taste and grows in clumps. They have an oval-shaped bulb with long, flat leaves. This plant is one of the most versatile vegetables because it can be eaten raw or cooked. It can replace chives, onions and scallions in many dishes, but it does not have the same pungent smell as onions or garlic

Galangal is a root native to Southeast Asia. It is closely related to ginger and grows in tropical climates. It has a peppery, slightly sweet taste that is great for cooking and can be used in soups, stews, sauces, noodle soup, marinades and more. The plant's root can be ground into a powder or sliced in thin strips to be added to dishes as desired.

Golden needles in Asian cooking are the dried buds of the lily plant. Dried lily buds are the perfect addition to your Asian cooking. They have a sweet and delicate flavor that is perfect for meat dishes, soups, broths, and stir fries.

Kaffir lime leaves are a type of citrus fruit that are used as an herb in many Asian dishes. They have a distinct aroma and flavor that is often described as earthy, herby, and citrusy. One way to use the leaves is by boiling them in water until they become soft and then using the water for stocks, soups, or sauces.

Lemongrass is a plant native to Asia. It has a pleasant, lemon-like scent and flavor that can be used in cooking, drinks, and herbal remedies. Lemongrass can be found at many grocery stores or purchased online.

The Sichuan peppercorn is a spice that is used to add flavor to many Asian dishes. The taste of the peppercorn is milder than regular black pepper and leaves a tingling sensation on the tongue. It is certainly one of the more unique Asian spices.

Star anise is the seed pod of an evergreen shrubs native to China. Anise has been used in cuisine for centuries and is still used today in many dishes. It can be found in dishes such as Vietnamese pho and is a great way to flavor a broth in general.

Thai basil is the most common variety of the sweet basil plant that grows in Southeast Asia. It has a distinctive anise flavor and aroma, with hints of licorice and spice. Thai basil has a purple-green color and is one of the more common fresh Asian spices.

Cumin is a seed and ground spice that has been used for thousands of years in many cultures. In India, it is often found in lentils, curries, pickles and chutneys. In the Middle East, it's often found in soups, lamb dishes and grilled meats. Cumin is also a key ingredient in Mexican cooking.

Black sesame seeds are called hei zhi ma in Chinese, meaning "seed of the dark" and have a thin, black skin. They have a slightly sweet flavor and are high in calcium and iron.

The cilantro plant is a member of the Apiaceae famly and is also known as coriander. It has been used for centuries as a culinary and medicinal herb in many cultures. Commonly used in Asian cuisine, the leaves are usually finely chopped to form part of a sauce, salad or garnish, such as in Thailand's popular dish green curry.

Fenugreek is the dried seed of a plant in the pea family. Fenugreek seeds are used in South Asian and Middle Eastern cuisines to flavor dishes. The seeds are typically roasted or ground before they are added to food.

This mixture of five spices is a common blend in Chinese cuisine. The blend can be used on meats and vegetables, but is most commonly found in sauces. Five spice powder can be found at many grocery stores and specialty markets.

Curry powder is a blend of spices commonly used in Indian, Thai and other Southeast Asian cuisines. Curry powders usually consist of a mixture of coriander seeds, cumin seeds, turmeric, red pepper and other spices.

Mint is a herb that grows in most regions of the world, and is widely used in both Western and Eastern cooking. It has a fresh, strong aroma and taste that's used to add a cooling flavor to food.

Nigella is a flowering plant related to the cabbage. The seeds are used as a spice and for medicinal purposes. They are mainly used as a condiment or flavor in some dishes. Nigella seeds, an herb native to Africa and the Middle East, are rich in nutrients and offer unique health benefits. It is commonly used in Indian cuisine.

Garam masala is a spice blend usually consisting of coriander, black pepper, cumin, cardamom and cloves. This spice blend is used in both Indian cooking and other cuisines around the world to flavor dishes such as curries, soups, rice pilafs, grilled meats, and grilled vegetables. Garam masala may be purchased at most grocery stores or markets.

Seven spice, also known as Shichimi Togarashi, is a blend of spices in many different combinations. It can be used in stir fries, appetizers and more. The ingredients can vary but they are typically: poppy seeds, white sesame seeds, red pepper, ground ginger, citrus powder, seaweed flakes and Sancho peppercorns. It is typically used in Japanese cuisine.

One of the most common spices used in Indian cooking is mustard seeds. Mustard seeds are actually the fruit of a special kind of plant, and they're very easy to grow in your own garden (or even on your windowsill). They come in different colors, too. You will often find them used in Indian curries.

If you enjoyed this post, I would really appreciate you sharing your thoughts in the comments below and sharing this post on social media. Thank you!